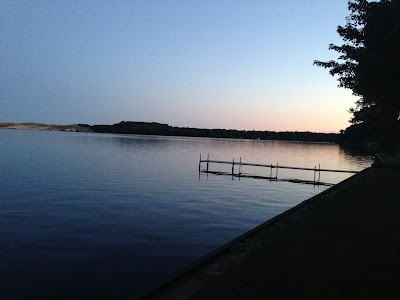 The beginning of August brought a long-awaited road trip to Michigan, a place of mythical outdoor opportunities. My wife’s family has had a large cottage on a beautiful lake there since the beginning of time—an old-school lake house with hand-built bunkbeds, raw pressboard walls, and the mellow waft of 50 years of damp swimsuits. The ideal place for a mid-summer escape.

The house is on Hamlin Lake, in the town of Ludington. It's is separated by only a mile of dunes from the looming presence of Lake Michigan. This area considers itself the gateway to upper Michigan, an outdoors Mecca, and Ludington shows it when you drive around; fishing, boating, paddling, mountain biking, and off-roading all find houses of worship here.

We drove 1,000 miles in two long days to get there, and were greeted, a few hours after we arrived, with a postcard sunset: 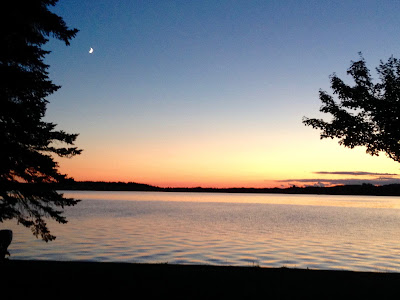 Within a day of arrival, I approached nearby Trailhead Bikes about a rental. I ended up with a sweet 27.5-inch hardtail, built up by the shop owner with SRAM XO front-to-back (including interesting new grip shifts) and, overall, light as a feather and stiff as a board. A fun and appropriate ride for the terrain. 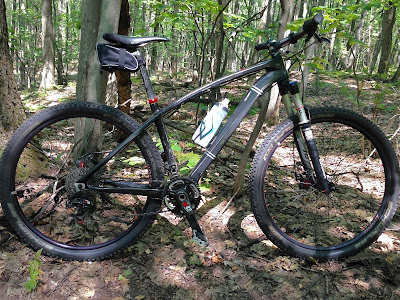 That afternoon, I floored my borrowed minivan east into Manistee National Forest for a short ride on the fabled North Country Trail, which runs 4,600 miles from northern New York State all the way to North Dakota. I had time for a whopping ten of those miles (round trip), which were tight, twisting, low and rolling. And very, very quiet. 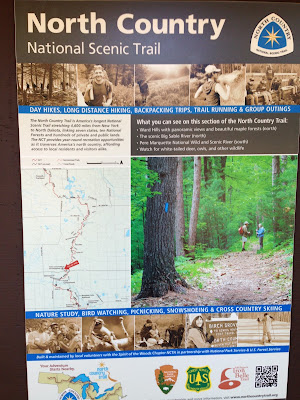 The bulk of my riding during this trip, however, was at beautiful Lake Michigan Recreation Area, a giant campground and trail-and-road system running through Manistee National Forest, along the shores of the eponymous body of water.

It's easy to hook up many miles of trail and dirt road here. It was my first time riding the classic midwestern road that has given birth to so many gravel grinders over the last decade or so. They're long and straight...

...and the trees, at least here, are evenly spaced and all the same height and age. I'm guessing this is because second-growth, managed forests out here are much younger than those in New England, which are generally much more dense and diverse. In Manistee, this lent a delightful, parkland feeling, with sun streaming through even the most remote woods. 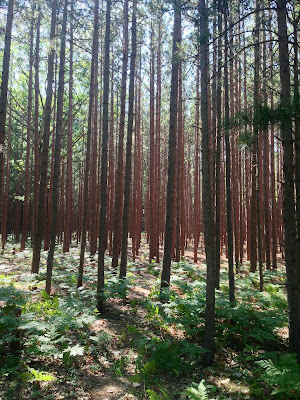 Another thing about the midwest, or at least this slice of it: there's lots of room, which means the twenty or so campgrounds I passed on the beautiful dirt-sand access roads were far enough apart that they felt wonderfully isolated. To a New England boy, this seemed heavenly.

As I wended my way closer to the lake, I was delighted at the increasingly sandy roads. Eventually, though, I wallowed, and had to dismount and hike-a-bike. An invigorating change for someone used to Eastern hard-pack. 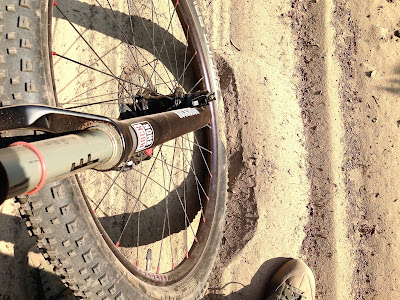 Eventually, all roads lead to the paradise that is the narrow, quiet lake beach. I locked up the bike and jumped in the delicious water, rinsing away the grit and heat of a humid day. Lake Michigan turns out to be, by the way, the fifth largest lake in the world. Standing on its shores, even this New Englander raised on summers in the great Atlantic was impressed. It's basically an inland sea.

Back in Ludington (about a half-hour drive south), I visited the other bike shop in town, a newcomer called Spindrift Cyclesports. I befriended the jackal-like shop dog... 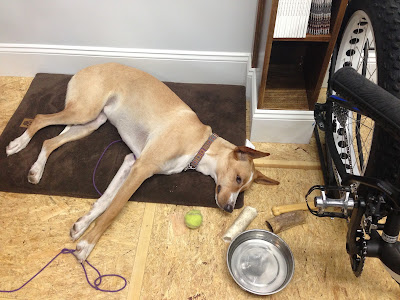 ...and took advantage of the espresso bar in the back, right opposite the repair area. Good brew, by the way; strong and smooth. 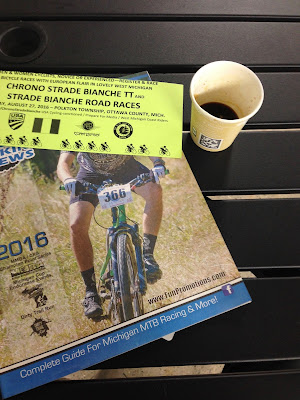 On our final night in the area, the missus, her brother and I visited the Ludington Light on Lake Michigan. It was first lit in 1924, and is still in operation. 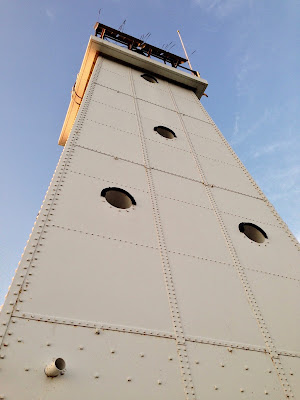 Standing out on the buttress, we witnessed the giant ferry departing for Wisconsin. (Turn up the sound for a treat at the end of this short clip.)

The next day, we ended the first leg eastward with a stop in Bowling Green, Ohio, where another brother-in-law and his family live. In the morning, we found coffee and classic midwestern architecture in town. 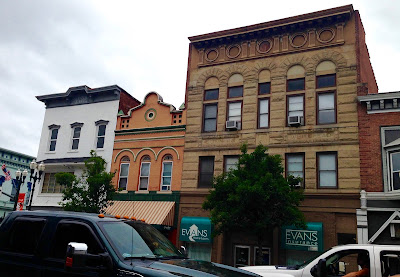 Our final stop of note was Niagara Falls, which my wife had always wanted to see. The state park is America's oldest, dating to 1875, and is one of the most popular. Not surprising; how often do you get to see millions of gallons of water plunge hundreds of feet... every second?

Each is impressive in its own way. The unfortunate over-development surrounding them (lots of concrete and cheap concessions) does little, in the end, to diminish their majesty.

I dreaded all the driving this trip would involve for months in advance. But our 2,000-mile jaunt ended up as a Grand Tour of Midwestern Summer Wonders. I'd happily go again.

Note: All videos began as rich iPhone footage. Blogger unfortunately compressed them down to ten-year-old, flip-phone-quality video.
Posted by Harry at Monday, August 22, 2016