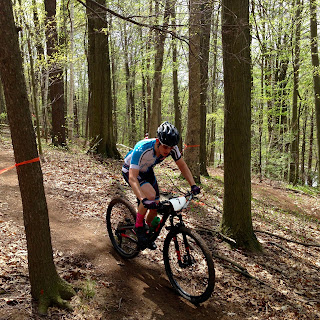 Saturday, April 29, 2017—I hied myself down to the UMass Amherst campus for the new Orchard Hill Assault mountain bike race, a revival of a course that was a hot ticket back in the hoary early days of the UMass Bike Racing Club, but neglected in the decades since.

The club has been working hard on the trails out there this year, which now look to this observer like 2.5 miles of flowy, pumpy fun. They start by the old UMass observatory, a cute little thing at the top of the hill, today featuring bikes and riders leaning on it. 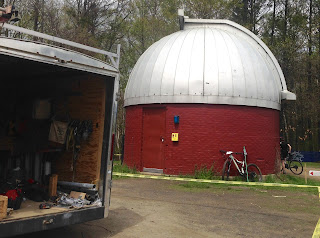 A very small crowd, consisting mostly of racers, was gathered ahead of the start of the Pro/Cat 1 race. I copped a squat in the woods by a sinuous S-turn, where I could get a snaky video of the field toward the beginning of the course (sorry for the quality; Blogger is a frustrating platform):


A young woman on a Focus hardtail was noodling around, pre-riding the course and checking out the angles of approach. She smiled at me and we exchanged greetings.

I later found out, to my delight, that this was Ellen Noble, three-time U23 cyclocross national champion and, oh, yeah, world cup U23 cyclocross champion. She's the real deal, a New England-grown hero, who attends UMass for Public Health and presumably writes her papers in between races. I've seen Ellen compete in big races, but now, it was just her, her bike, and the woods. I'm told she was scheduled for another race, but it was canceled, so she must have figured, Why not get a workout in, just down the road from my dorm?

Needless to say, she was first through the turns (and at the finish): 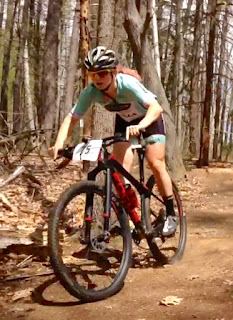 The trail cut a swath through wide-open fields (where the eponymous orchards used to be?): 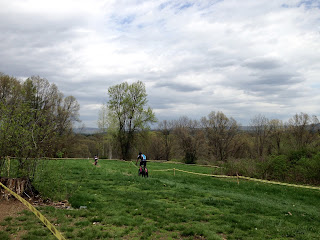 The event was, shall we say, casually attended. The podium for the Cat 2 race was a slightly higher patch of ground, and the Cat 2 racers were whizzing by, focused only on the wheel ahead of them: 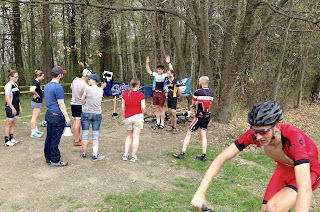 I'm sure glad I got out there on such a warm spring day. First, I know I'll be back to ride those delicious trails, only a few miles down the road from my home and even closer to my office. Second, I rubbed elbows with a world-class racer. Third? Duh! Local.