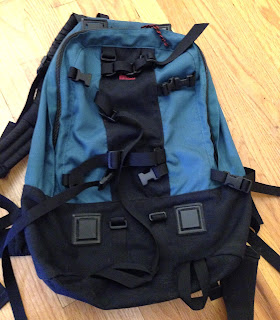 It was April 1996, and I was standing in Eastern Mountain Sports on Lower Broadway, not far from my tiny apartment in the East Village. I'd been nose-to-the-grindstone in the work world for 10 years, and now I was kitting up for a real vacation. A week in the Southwest, the site of my long-ago teenage awakening to the Earth.

I was planning on a lot of hiking, and needed a bag for water, snacks, a jacket. The salesperson introduced me to the concept of "day packs," and pointed out a house-brand model. He talked about the benefits of this particular size, the use of the external lashes, the durable materials. What did I know?  I bought the pack.

A few weeks later, it was on my back while my girlfriend and I hiked into a canyon at Bandelier National Monument, north of Santa Fe. The sun was double-bright, the sauna-like heat wrapped around us like a blanket, and the vast terrain effortlessly swallowed the occasional snatch of bird song. Coppery canyon walls, gnarled and ancient trees. We crushed juniper needles between our fingers, and were refreshed by the fresh scent. In a small ravine, a creek ambled quietly; we snacked in the shade.

Back at the trail head, our brand-new hiking boots were covered with brickish dust, and my heart once again belonged to the Southwest. The girlfriend and I ending up arguing terribly and splitting up right in the middle of that trip. She booked a flight to her parents' house. I went home, packed or sold everything I owned, and moved to a small apartment in Taos. I went alone, and spent most of that blissful summer and fall hiking and learning to rock climb.

I had gone from up-and-coming executive to drifter dirtbag in the blink of an eye. And I was in heaven.

The backpack was with me on innumerable hikes in New Mexico, most often to the peak of 12,700-foot Gold Hill—my sanctum sanctorum. I once blissed out in meditation on that bald peak, no bigger than a walk-in closet, while thunderheads gather overhead, close enough to touch. A thunderclap went off like a cannon just over my head, and I grabbed the pack and beat the land-speed record back to the treeline.

I moved back East the following year,  and in the two decades since, that pack has been on scores of hikes in the mountains of Massachusetts, New Hampshire, and Maine. It even went back with me to the Southwest for an ecstatic week in the spawling canyons of Utah.

Once in a while, I get to thinking that the pack has done its duty, and I deserve a slick new job with more features and a cooler color. Then I realize a few things: 1) Other than a broken waist buckle (which still works) it's as sturdy as it ever was; 2) It's huge and fits all I need and more; and 3) the goofy '90s-teal color is so out of date that it's now back in fashion. Would I really be better off with something that made me feel a little more up-to-date? And without all the memories clinging to the fabric, like wisps of mountaintop mist?

So far, I'm still heading out with my old friend, the serviceable, faded daypack.


The Durable Goods series features that killer piece of kit or gear that's been with you for years, and goes with you every time you head out. You can neglect or abuse it, and it's always ready for more. All hail!
SaveSave
Posted by Harry at Tuesday, September 27, 2016