H is for Hawk: The Struggle to Go Wild 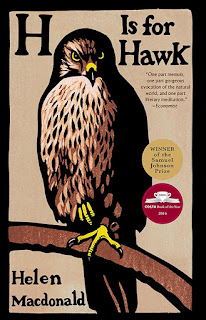 Wilderness writers down the ages have been renowned weirdos and misfits. John Muir’s sporadic attempts to live in town inevitably ended with a hop over the back fence with a bunch of tea leaves and a crust of dry bread in hand, not to be seen for weeks.
Edward Abbey was a steely-eyed wildman with a fearsome beard-cum-bird’s-nest, most famous for shooting his television in cold blood in his own backyard.  And let’s not even get into St. Francis. Dude gave away everything, and took off to shack up with the birds.

In brief, folks who feel all the more alive the further they get from the trappings of civilization generally just don’t “fit in.”

I’ve recently finished H is for Hawk, by Helen Macdonald, a very hot recommend for the last year. Macdonald is a celebrated new member of the Nature Nut Club, but even compared to charter members, she bit off quite a lot with this book. Not content with a fraught memoir of the time after her father died, leaving her delirious with grief, she threw in the taming and training of a feral goshawk, with all the bonding, neurosis, hunting, and heartbreak that follow. (The goshawk is regarded as most fractious and moody of raptors.)

And, oh--did I mention that she maps both of those excruciating events onto a literary and psychological critique of The Goshawk, an obscure work by T.H. White (also author of The Sword in the Stone) about his failed relationship with his own goshawk, many decades earlier? White’s hawk book played no small part in Macdonald’s childhood obsession with falconry.

H is for Hawk’s greatest gift lies in the author’s evocation of nature, and especially in her portrait of Helen, her hawk. When Macdonald describes the return of the bird to her hand from a distant branch, you’ll swear you felt the impact of her talons on your fingers and picked up a faint scent of feather oil and forest musk. As a naturalist, she casually reels off the taxonomies of everything from birds to beeches; as a writer, she brings them to life by engaging all your senses. The intricacies of hawks and their training are laid bare in long, elegant passages.

Macdonald also has a grasp of the complexity of our very relationship with wilderness itself. There are striking passages about the way our belief in nature as a primeval, untainted cure-all obscures what natural history soberly reveals: that every landscape has been irretrievably changed by human activity.This truth must be all the more obvious in England, where millennia of civilization in one small area have left behind multiple layers of change.

Eventually, the author writes, “I realised that these myths hurt. That they work to wipe away other cultures, other histories, other ways of loving, working, and being in a landscape.” Her affection for this complexity (so different from the popular craving for a return to Eden) has sweetened my own relationship with the complex landscape in New England, my home for the last two decades.

Macdonald explores the interplay between humans and the wild elsewhere in the book. She finds herself, in her grief, becoming so intimate and isolated with Helen that she starts to see the world through the eyes of a bird of prey. This goes so far that, eventually, human interaction becomes all but impossible. In the end, she realizes that her grief and depression had driven her to try to heal herself by becoming completely wild. Eventually, and with help, she settles into a comfortably differentiated, but no less affectionate, bond with Helen.

For all its valuable insight, H is for Hawk also has flaws which threaten to overpower it.

Like so many academics, Macdonald seems incapable of leaving out even one secondary (or tertiary) thought. She also lards her prose with words like palimpsest and besom. I understand that broom (a commoner version of besom) doesn’t underscore the theme of the book by evoking 12th century English rural history, but it’s a very functional word which has the benefit of allowing me to finish the sentence without having to consult my dictionary.

Most importantly, Macdonald spends a lot of the book overworking emotions and insights. She over-values small, significant moments, which leads to prose as purple as, “Sometimes a reckoning comes of all the lives we have lost, and sometimes we take it upon ourselves to burn them to ashes.” This pronouncement describes not a desperate act of arson, but simply the dark way White portrayed a character in one of his lesser-known books.

Even if her writing threatens at times, like Macdonald’s hawk, to fly off past the treetops and lose me completely, on the whole, H is for Hawk nails its prey: a gorgeously mottled relationship with a small, fierce animal.  Along the way, she lays bare the ancient and fascinating conflict between human and nature.

We have forever tried to cross the line separating us from the power of the wild, as a way of curing the human condition. The advent of civilization may have cast us out of Eden, but it also provided the safety and freedom to reflect on where we came from--to produce a thoughtful work like this one. Over and over, we leave our safety to stake our claim to that Original State. Invariably, we’re disappointed, but, if we’re astute, we still bring back irreplaceable inspiration.

The Muirs, the Abbeys, and now, Macdonald, are crazy like a fox: mad enough, even, to capture a bit of the precious allure of the wild.